Google Adwords Ban And How To Get Your Account Unbanned Unsuspended 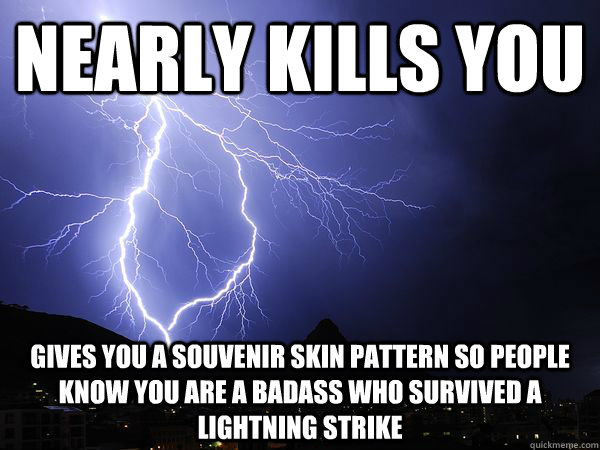 So lightening indeed has struck twice in my case with this one being an epic of a journey with fighting tooth and nail in order to get my Adwords account restored.

In fact its probably the main reason why I temporarily abandoned updating my blog which over many months turned into years. Its also the reason I changed course with making money online with pursuing a completely different angle of developing an online software platform.

Hence I’ve been meaning to write about this on my blog for sometime with it being almost two years ago from when it happened. If you read my post on FB Ads ban and how I got my account back again, you’ll understand my comment that the FB experience was way, way easier than getting back into Big G’s good books.

The Long Battle To Get My Adwords Account Restored

It took almost four months and with persistence I did get my account back, but at the expense of what only can be described as a Pyrrhic victory which you will see was a hard price to pay with the inappropriate decimation of some of my web properties. Was it worth it? Well I’ll leave that for you to decide.

Now before I really get into the details… Let me explain… I’ve been doing online marketing since 2008 and as such I’m no newbie to the subject. My main area of focus for traffic was always SEO, but at the start 2013 I decided to mess around with ads in particular Facebook and Adwords as part of a combined approach with implementing SEO in the long haul.

Jumping In The Deep End With Using Adwords

This holistic approach with using ads would allow me to compare the ROI with regards to time, money and effort. For example to do successful SEO these days it involves a significant amount of time or funds spent on outsourcing such as for content, spun articles for tiered back linking as well as other techniques relating to creating PBNs (private blog networks) with buying expired domains.

As you can imagine the costs for organic rankings is expensive as well as the time invested and as such I figured it was time to relent to using ads given the instant traffic results. It still surprises me to this day the number of people whom see SEO as a means to get traffic for free, when its far from it, especially with regards to effort, time, tools, proxies and other costs.

In hindsight I’ll even go so far as to say that using ads is a great way to get your offers launched quickly together with the means to adjust and correct course and further its indeed possible to achieve enduring results which can make a profit. In fact you maybe tempted to not bother with SEO as I have now done with many of my campaigns, now that I have spent some time going through the pain of lessons learned with finding out what works and what does not.

Email From Adwords Regarding Policy Violation & Declaration Of War

Okay enough of the ramblings and lets take that trip down memory lane. It all happened suddenly out of the blue with receiving an email stating that my ad campaign had been put on hold due to a manual review which required action on my part to correct. This action related to the “user safety” policy as you can see from the below email screenshot: 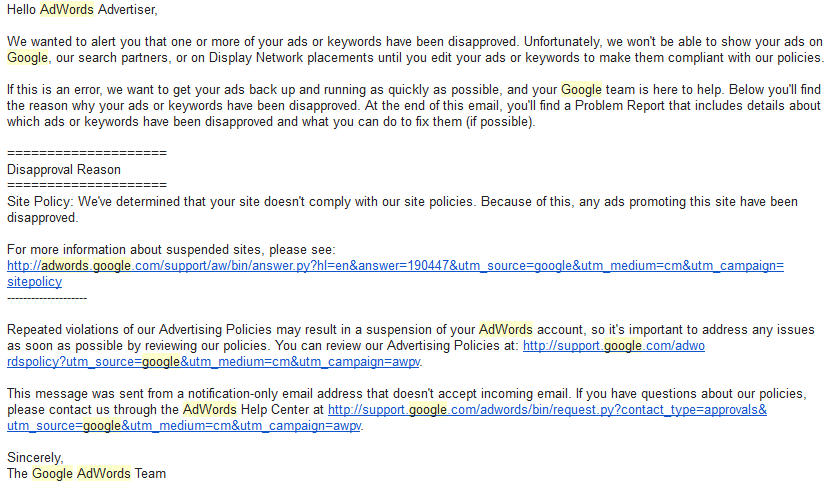 I contacted G’s Adwords team and was informed that I needed to included various disclaimers throughout my copy, such as those relating to testimonials. As such I quickly implemented the changes and further I also incorporated similar changes on my other websites which had Adword campaigns associated with it. I submitted a site review which included an attached document outlining all of the changes. Little did I know that my review appeal would lead to Pandora’s box. Suffice to say here is the reply:

Actually there was a lot more to it than the email shown above. One would be forgiven for thinking that the issue relates to “user safety” policy alone, I was also getting hammered on the “bridge” policy which basically stops affiliates from using Adwords in the first place.

That is because you are not allowed to promote a product/service which requires the user to click on a link to go to another website where they can proceed to make a purchase, hence the term “bridge”.

With that said its worth noting that there is nowhere within Adwords policies which states “Affiliate Marketing” is not allowed, but this specific policy does indeed make it impossible to use Adwords as an affiliate marketer.

However there is an exception which I came to discover later which borders on the darker arts of IM, which got me into a completely different direction with developing software and hence going AWOL from the blog 😉 This particular method involves bypassing the vendor website and straight to sales check-out which you can do using CB Clicksale’s ClickBank campaigns.

Another typical one to be aware off is the “Information Harvesting” policy which applies to landing pages which aims to build an email list through offering a bonus incentives. In fact I’m sure its Info Harvesting policy which has hammered most internet marketers away from Adwords and in the same token I now also realize that so many supposed gurus who advocate Adwords, have most likely have never used Adwords themselves as they would not say such things as using Adwords for list building.

Okay I see I’m now going off in a tangent and back to how I managed to get my Adwords account unsuspended. What happened next is somewhat crazy. I repeatedly implemented changes to my website and submitted a review and upon every submission I would find out other issues after calling them on the telephone.

Get The Wrong Adwords Reviewer: Pandora’s Box Into The Never Ending Rabbit Hole

It was crazy, I was told to change tiny things here and there. It was as if the Adwords reviewer wanted to make it impossible for me to actually get my account back. For example they quoted from my website –  “get these 22 bonuses worth over $100 for free” – was regarded as  part of “get rich quick schemes” and consequently it had to be re-written or my account would remain banned.

Keep in mind the end result was a copy which lacked any imagination or ability to market a product with it being more boring than watching paint dry than to read a paragraph. It begs belief the Adwords would want you to make a profit with using their ad platform. In fact I went through every single policy out of frustration and commented whether it was applicable to my website with changes made in response. Here is a summary:

I also went into the User Safety policy with breaking it down literally paragraph after paragraph with an assessment on my part as to how I viewed my website against it. Again here is a summary of that:

In fact my document which tracked all changes made to my websites amounted to more than 70 pages by the time I made it to my last submission for review. It included detailed screenshot images of changes made. Through this process of going back and forth I also realized that pretty much every single website on Adwords is in violation of their policies and from a reviewer’s perspective you could easily cite the user safety policy as means to road-block all requests to re-instate an account.

Not being one to give up, especially as I had now spent months making changes, I decided to change tactics. I pointed out that most websites on Adwords where in fact in violation with providing rationale as to why. I sent this report and I am sure to this day that this really upset a few people behind closed doors 😉 Suffice to say I was still in battle mode and at this point the Adwords reviewer could not find anything wrong with my website as the next reply was a total shock!

Digging Deep Into The Trenches… I’m Going To Get My Adwords Account Back No Matter What!

I was next informed that indeed my websites where all compliant, however the links going to other websites on my copy where not. In otherwords the affiliate product which I was promoting, their website was in violation. In chess they call this check-mate. I was told that I would have to remove that should I want to get my account restored. Basically this amounts to deleting my websites and replacing it entirely something else.

At this stage I was furious and decided to vent my frustration at the Adwords forum. You can read my original post here: Why Should I Delete My Website.

In fact I went on the offensive and posted my frustrations on these threads also: “Understanding Advertiser Account Suspensions” as well as this one: “Fixing Suspended Site Due To User Safety” among others. I’m not sure if it raised my profile but perhaps it did help in some ways in getting noticed.

At this point I decided to delete my websites with replacing the content with something entirely different. In the end I got this far and it was too late to throw in the towel and besides I wanted to see what else they could throw at me. I therefore amended the websites and got a reply that I also needed to monetize them, hence I also added a bunch of ebooks with a buy now button. By this stage the entire experience had really dragged on to the point of mental exhaustion. Here is the reply that I got:

Wow! The end had come and I finally got my Adwords account back again! I look back now and wear it like a battle scar tattoo… In fact I’m now of the opinion that battle hardened Internet Marketers are the ones whom under go such BS of which I am sure most would simply move on. 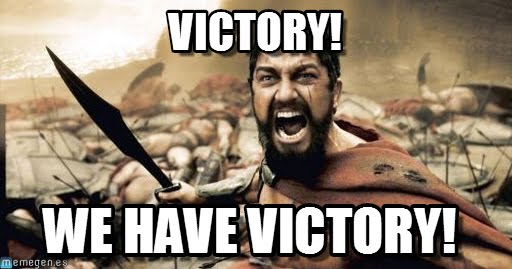 In hindsight it would of been much easier to do that and perhaps use my wife’s details for future Adwords campaigns. But with that all said and done, I learned a lot. Its as if I got free consultancy and training worth its weight in gold…

Are You Banned From Adwords? Then download the Free Report Which Explains In Detail On How To Pass The Manual Review Process!

Download my Adwords Review Help Guide which outlines the type of report you should submit when making an appeal as well as the type of changes you need to make to your website. It includes my lessons learned whereby in hindsight it would of been quicker to implement these than to endure months of repeated changes. Simply give a social share or a like for instant access. Let me know if you have any questions below and I’ll be more than happy to help out.